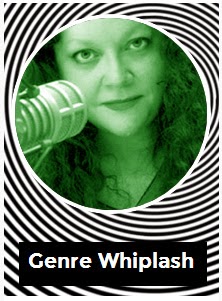 Thump and Growl is back! (Kiiiinda.)

It’s been two months since WBAI cancelled my show, and I’ve not yet given much thought to where Thump and Growl will land. Girl’s been busy. I can, however, announce the launch of something I’m feeling wicked squealy about. Video network Waywire.com has installed me as curator of their new Genre Whiplash Channel.

Video has limitations radio doesn’t, and vice versa. I’ll be navigating those trade-offs, creating what I hope will feel like a visual version of my radio show, though more easily sharable, more reliably archived, and customizable in that you can repeat songs you dig, and skip songs you don’t. You’ll even be seeing my chirpy-ass visage from time to time. (It’s in my contract.) (The visage part, not the chirpy.) And consider the math…

<>  Percentage of the gig I can perform whilst wearing only my undiepants: 97%

<>  Days per year I’ll have to set the alarm for ungodly:30 in the am, climb over snowbanks with wet hair, and ride a bus and two trains at least one of which will smell like balls, all before I’m even fully awake: < 11

<>  Number of Carlin words I can use without the FCC fining my employer: All of ‘em. Every motherfucking one.

I’ve already been working for Waywire since last Fall, as curator of the Body Image Channel, and they’re good people. Competent, professional, innovating grown-ups, wielding the tools of the 21st century. And they’re paying me to do something I’d be doing anyway.

Will I still find Thump and Growl a new radio home? Dunno. We’ll see. If so, I can do both. I have the strength of ten men, y’know.

Many thanks to the friends who’ve inspired some of these inclusions, including Rich, Reesh, Kwame, Rebecca, Hans, Leon, Joy, Peter, Mark, and probably Bob. Also most likely Jay. And almost certainly David.